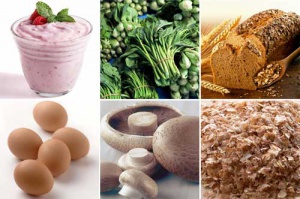 Vitamin B10, also known as PABA/para-aminobenzoic acid, 4-aminobenzoic acid or factor R, is determinedly an organic compound of B vitamins and pteroylmonoglutamic acid. Only slightly soluble in water, PABA is a white grayish crystal material that is made up of a benzene ring substituted with a carboxyl group and an amino group. PABA is commonly used as a permanent skin protector against pollution and sun damage otherwise known as free radicals. It has been known to have anti-inflammatory and anti-allergic effects in people and is essential to the growth and regulation of the skin and normal coloring. Although it is debated whether or not PABA is essential for humans, it has been increasingly implemented in sunscreens to decrease exposure to UV rays from the sun and is used to treat rheumatic fever.

PABA is highly debated as to whether it is actually a necessary nutrient compound needed for humans, but in spite of this there are many claims that PABA offers various health benefits such as treating depression, eczema, scleroderma, and irritability, loss of pigmentation in the skin, fatigue and grey hair that occurs prematurely. PABA is utilized to treat fibrotic skin disorders and the gastrointestinal symptoms of IBS, irritable bowel syndrome. This compound is also commonly used in sunscreens as protection against free radicals and UV ray damage to decrease the risk of skin cancer.

Increasingly implemented in sunscreens to protect against free radicals such as pollution and sun damage, PABA is thought to have anti-inflammatory properties and because of these properties, has shown to prevent premature aging such as wrinkles, sagging or age spots on the skin. It is occasionally used to treat premature grey hair and is seen to have anti-allergic properties to assist in the treatment of various skin conditions and illnesses such as eczema and vitiligo.

The rate at which we need PABA or whether we require it at all seems to be highly debated, but it is commonly used in spite of this.

Symptoms of a deficiency include de-pigmentation on various areas of the skin, increased breakdown of estrogen in the liver, irritability, constipation, depression, hyperthyroidism, anxiety, and skin conditions such as eczema.

Side effects of an over dose or toxicity of PABA includes skin rashes, liver disease, low vitamin C levels, low vitamin B6 levels, nausea, toxicity of the liver, hypothyroidism, jaundice and vomiting.