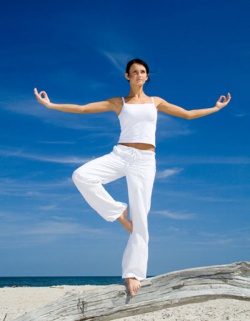 Yoga is the traditional practices of physical and mental disciplines originating in India. The word yoga is specifically associated with meditation practices in Buddhism Hinduism, and Jainism.

Yoga is referred to in texts dating back to 900 BCE and several seals found at Indus Valley Civilization sites dating back to 3300 BCE suggest yoga has been around for thousands of years though there is no conclusive evidence to this end. Various techniques for achieving higher states of consciousness through meditation were developed and practiced by the shramanic traditions and the Upanishadic traditions. Theorized from early Buddhist texts, many believe that the earliest meditation techniques were derived from pre-Buddhist early Brahminic texts as various techniques were described as well as meditative practiced and meditative states.

There are various styles of yoga within the 3 main religious or lifestyle practices and beliefs of Hinduism, Jainism and Buddhism. Hinduism yoga refers to one of six orthodox schools of Hindu philosophy and its goal. Jainism yoga is the total of all activities including physical, mental and verbal ones. Major branches of yoga in Hindu philosophies include Karma Yoga, Bhakti Yoga and Hatha Yoga. A variety of texts, including the famous Bhagavad Gita, all discuss the various aspects of yoga. Yoga’s Sanskrit meaning is varied, but translations include “uniting”, “contemplation”, “union”, “conjunction”, “absorption” and/or “means”. Various styles of yoga to develop out of these three spiritual groups include anuttara yoga, hatha yoga, bhakti yoga, karma yoga, and yantra yoga.

The benefits of yoga are seemingly countless. From your physical health to your mental state, yoga is known as one of the best forms of exercise and, because of its spiritual emphasis, largely beneficial to one’s mental health and happiness. Although there are many things to be gained beyond physical, below are some of the various benefits one might gain from the practice of yoga:

Aside from the more evident physical benefits gained from yoga practices, there are also innumerable benefits for mental health as well including the decrease of stress and frustration, improved energy levels, improved immunity and overall health levels assist with higher levels of happiness and contentment, improved self-awareness, self confidence and more. Yoga has also been known to improve concentration, memory, attention, improve the mood and prevent anxiety and/or depression, self-control, calm states, social skills and an improved mind-body connection.