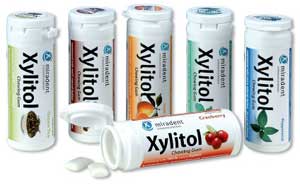 Xylitol is a natural sugar alcohol which is found in birch trees and in the fibrous portions of many fruits and vegetables, including berries and mushrooms. Approximately five to ten grams of Xylitol is manufactured naturally in the human body daily under normal metabolism. Some other common names are birch sugar, E967 and xylite.

In the 1940s, Xylitol was generally used in European households as table sugar during the sugar shortages.

Xylitol has been recognized by dentists and health professionals as a healthy alternative to white sugar consumption. Since it inhibits bacterial growth, it is most valuable in the prevention of tooth decay and related gum disease.

Since Xylitol is low glycemic, it can be used by diabetics to replace the use of white sugar in foods and beverages.

This natural sugar has a history of being used successfully in the treatment of middle ear infections (otitis media) in young children.

Some products which contain Xylitol are as follows:

Xylitol has not been known to have many negative side-effects, however there is a concern that extremely large doses (over 50 grams daily) for extended periods of time (several years) may cause tumors.

Some mild reactions may be diarrhea or intestinal gas. Women who are pregnant or breastfeeding should avoid using Xylitol, because there hasn't been many studies provided and effects are unknown.

Xylitol is extremely toxic to dogs and other pets.