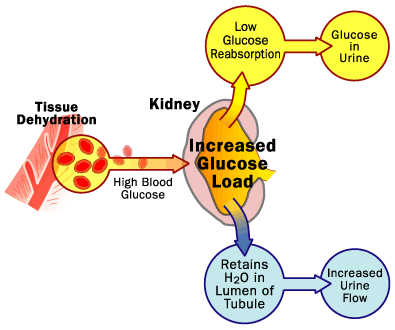 Diabetes, also known as Diabetes mellitus, is defined as a condition or group of conditions in which someone has abnormally high blood sugar either because cells do not respond to the insulin being produced in the body or because the body is not producing enough insulin in general. High blood sugar levels produce various symptoms of increased thirst, frequent urination and increased appetite. There are two type of Diabetes: Type I and Type II. Type I Diabetes, also commonly known as juvenile diabetes for its frequency to afflict children, is a condition a person is typically born with that is usually a hereditary condition and requires insulin injections. Type II Diabetes is most often caused by insulin resistance, which is a condition where cells in the body fail to utilize insulin properly or at all and is sometimes combined with insulin deficiency.

Type I Diabetes, also known as juvenile diabetes or insulin-dependent diabetes mellitus, results when a person’s body cannot produce insulin at all. This condition usually requires the person to receive or give themselves insulin injections daily to maintain normal blood sugar levels. This condition is usually one that a person who is normal and healthy in most all ways is born with, that is most often hereditary and unfortunately, is said to be irreversible, though there are debates in medicine, Eastern and Western, as to whether the condition can be cured or not.

Type II Diabetes is caused by insulin resistance, a condition in which the cells of a person’s body fail to utilize insulin correctly or at all. This is the most common form of diabetes. Sometimes combined with an absolute insulin deficiency, Type II is usually not a condition someone is born with, but a condition someone develops over time. Many of those afflicted tend to be overweight or obese as these two groups of people are likely to have high blood sugar levels. Luckily, this condition, if caught early enough, may be prevented and even reversed.

Occurring in 2-5% of pregnant women, this type of diabetes occurs in pregnant women who have never had diabetes before obtain high blood sugar levels during their pregnancy term. The diabetes is sometimes reversible once they have given birth, but experiencing this condition may predict a development of Type II Diabetes in the future.

There are various other less common types of diabetes mellitus which include cystic fibrosis-related diabetes, several forms of monogenic diabetes, a genetic form of diabetes which is due to genetic defects of insulin secretion called congenital diabetes, and steroid diabetes which are caused by large doses of glucocorticoids.

Causes of each type of diabetes mellitus vary far and wide. Type I is usually genetic, but is set off by a variety of contributing factors while Type II is caused primarily by lifestyle habits as well as genetics. Other types have various other causes and symptoms as well as triggers that can onset this condition.

The most common symptoms of diabetes mellitus are increased thirst AKA polydipsia, increased polyuria AKA frequent urination and polyphagia AKA increased appetite. Symptoms of Type I can be very sudden and may develop over a few weeks or months while Type II can develop much slower and more subtly to the point of having little or absent symptoms. High sugar levels can cause a change in vision; therefore blurred vision is usually a common symptom of sufferers of diabetes. Other symptoms may include: diabetic ketoacidosis AKA a state of metabolic dysregulation, nausea and vomiting, rapid deep breathing commonly known as Kussmaul breathing, diabetes dermadromes AKA skin rashes, and altered states of consciousness.

There are a variety of treatments for the various types of diabetes mellitus. Type I is most commonly treated with insulin injections. Type II and others may be treated by controlling the diet, oral pills taken to control and regulate blood sugar levels, insulin injections and in some extreme cases, dialysis.

In some cases, usually Type I, diabetes is an inevitable condition that one usually inherits. The most common form of diabetes, Type II, is usually preventable by maintaining a healthy diet and exercise regimen, controlling or reducing the body’s intake of various sugars and sugary food and drinks, and by frequently getting a check up with your medical doctor.