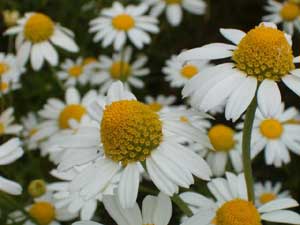 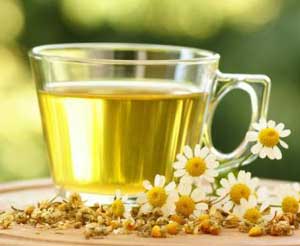 Chamomile Tea
Chamomile is a plant which is a member of the family Asteraceae. It has daisy-like flowers and a pleasant aroma. Chamomile is native to Europe, but can be found growing in other areas of the world also. It likes the sun and can tolerate most types of soil. Of course, Chamomile is a long-time home garden favorite. For medicinal purposes, the flowers are primarily used for their essential oils.

The essential oil of Chamomile has an anti-inflammatory, anti-spasmotic and anti-microbial activity in the body. When freshly distilled, this oil is blue in color, due to the presence of Azulene. Some other components of the oil include a-bisabolol, chamazulene, farnesene and herniarin.

Through pharmaceutical research, the a-bisabolol has been credited with the ulcer-protective properties of the herb, and chamazulene is the main anti-inflammatory. It's been suggested that there's a stimulation of local prostaglandin synthesis, thus strengthening the protective mucosal barrier against ulceration.

Important flavonoids have been found that include quercimeritin, which is involved in the reduction of capillary fragility. Other relevant constituents are anthemic acid, anthemidine, tannin and matricarin.

Perhaps the most well-known use for the Chamomile herb is to promote relaxation in the cases of insomnia and anxiety. Many modern day natural sleep-aids contain the herb Chamomile. It can be used in both teas and baths.

Chamomile relaxes and tones the nervous system, and calms anxiety and tension that produce gas, colic or ulcer. It soothes the walls of the intestines and aids in the proper functioning of the digestive system. It's effective as an anti-inflammatory internally for digestion and respiration, as well as externally for the skin.

As an anti-spasmotic herb, it works on the peripheral nerves and muscles, which indirectly relaxes the whole body. It's helpful for leg and stomach cramps, and can be used as a tea for gastritis.

Chamomile is a mild anti-microbial, which helps the body destroy or resist pathogenic micro-organisms. Azulene, a component of Chamomile, is bacteriocidal to staphylococcus and streptoccus infections. The oil from .10g of flowers is enough to destroy in 2 hours, three times the amount of staphylococcal toxins.

As an anti-catarrhal, Chamomile helps the body remove excess mucus build-up in the sinus area, therefore it's helpful for the alleviation of symptoms due to colds and allergies such as hay fever. Mucus is an essential body product, but when too much is produced, it's usually in response to an infection. Chamomile herb helps the body remove the problematic organism, also acts as a way of removing excess carbohydrates from the body.

Chamomile can be used fresh or dried, and in teas or tinctures. It is also a valued preparation used in aromatherapy. Tinctures in the amount of 1-4ml, can be used three times per day.

Though side-effects are rare, Chamomile may interact with blood-thinning medications such as warfarin (coumadin). It's important for anyone taking prescriptions to consult with their physician.

Allergic reaction may be experienced by those who are sensitive to any plants in he Asteraceae family such as; echanacea, chrysanthemums, asters, sunflowers, zinnias,dandelions, sagebrush, ragweed, etc. Symptoms may arise like itching, rashes, throat-swelling or abdominal cramps.

Pregnant or breast-feeding women should seek their doctor's advice before using Chamomile.

During the preparation of Chamomile teas, it's important to keep the pot covered, so none of the medicinal properties of the flowers and their precious oils escape. Chamomile has been used in the preparation of some alcoholic beverages like Benedictine or vermouth drinks. It's also used in flavorings in confections like candy, ice-cream, baked goods, desserts and chewing-gum.