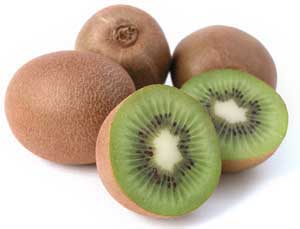 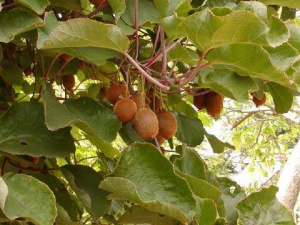 The Kiwifruit is a small egg-shaped fruit with a dull fibrous brownish-green skin that is "hairy" in appearance. The fruit itself is commonly a delightful bright emerald green, although some varieties are golden in color, both sprinkled with rows of black edible seeds.

This deliciously flavored fruit is native to China, and originally known as Yang Tao. In the early 20th century it was brought to New Zealand by missionaries, and in the year 1960, it was re-named Chinese Gooseberry. Also known as Kiwis, this fruit can now be found growing in Italy, France, Japan and the United States.

When introduced to the United States in 1962 for commercial use, the name was changed to Kiwifruit, in honor of the native bird of New Zealand, the Kiwi. The resemblance of the bird's fuzzy brown coat to the skin of the Kiwifruit makes the name quite appropriate.

The bright green fruit of this nutritional powerhouse contains numerous phytonutrients which protect the DNA in human cells from oxygen-related damage. It is also valuable for its antioxidant protection and is useful in the prevention of arthritis, asthma, artherosclerosis, diabetic heart disease and blood clots. It is known to reduce the fats (triglycerides) in the blood.

Because Kiwis have a high fiber content, they are beneficial for reducing cholesterol levels and promoting a healthy colon. Diabetics find that they are helpful in keeping blood sugar levels under control.

Kiwis have a high beta-carotene content, which makes them useful in the area of eye health, and the prevention of conditions such as macular degeneration. They're a natural source of carotenoids, beta-carotene, lutein and zeaxanthin.

Kiwifruit has twice the amount of vitamin C as an orange. Listed below are some nutrients found in the Kiwi.

Kiwifruit is uniquely pleasant to the taste, with flavors ranging from sweet to teasingly tart. They're often enjoyed 'as is', just peeled and sliced. Some will cut the Kiwi in half and scoop out the flavorful fruit with a spoon.

The perfect flavor union desired by many is the Kiwi mixed with strawberries. They compliment each other naturally, and this combination is found in many juices and dessert specialties.

Because of their bright emerald color, Kiwis add an exotic tropical flair to either fruit or green salads. They are known the world over as the eye-catching adornment of fruit tarts. Mixed with oranges and pineapple, they make a fine chutney used to accompany chicken and fish dishes.

Kiwis contain oxalates, which are naturally occurring substances in plants, animals and humans. When allowed to become too concentrated in the bodily fluids, they can crystallize and cause health problems in those with already compromised kidney or gall-bladder function.

Similar to avocados and bananas, Kiwis contain compounds associated with latex-fruit allergy syndrome. Those with allergies to latex should avoid consumption of Kiwifruit.