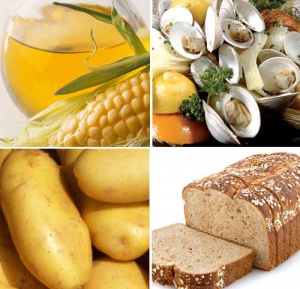 Chromium is an essential mineral found in concentrations of 20 parts of Chromium per 1 billion parts of blood. It has nutritional value in both animals and humans.

Chromium stimulates the activity of enzymes involved in glucose metabolism for energy and the synthesis of fatty acids and cholesterol. It also increases the effectiveness of insulin, helping the transport of glucose into cells. It competes with iron in the blood in the transportation of protein. Chromium may also be involved in the synthesis of protein through it's binding action with RNA molecules.

Chromium is difficult to absorb. Only about 3% of dietary Chromium is retained in the body. The mineral is stored primarily in the spleen, kidneys, and testes; small amounts are also stored in the heart, pancreas, lungs and brain. Chromium has been found in some enzymes and in RNA. Excretion occurs mainly through urination, with minor amounts lost in the feces. The amount of Chromium stored in the body decreases with age.

There's no recommended Dietary Allowance for Chromium. The daily Chromium intake of humans is estimated to range from 80 to 100 micrograms.

Even a very slight Chromium deficiency will have serious effects on the body. Tests indicate systematic deficiency of Chromium to be common in the United States, although it rarely occurs in other countries. Americans tend to be deficient because their soil does not contain an adequate supply, and thus Chromium cannot be absorbed by the crops or reach the water supply. The refining of natural carbohydrates is another probable cause of Chromium loss.

A Chromium deficiency may be a factor that will upset the function of insulin and result in depressed growth rates and severe glucose intolerance in diabetics. It is also believed that the interaction of Chromium and insulin is not limited to glucose metabolism, but also applies to amino acid metabolism. Chromium may inhibit the formation of aortic plaques, and a deficiency may contribute to atherosclerosis.

Chromium helps regulate sugar levels in the blood, and may be beneficial in the circulatory system of diabetic patients. Those on prescription medications for diabetes should consult with their physician before taking a Chromium supplement. Infants suffering from kwashiorkor have shown progress from oral administration of Chromium.