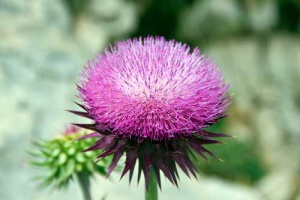 Milk Thistle is a plant which is native to the Mediterranean region of Europe. It can be tall, ranging anywhere from two feet to ten feet in height when erect. It has a branched and furrowed stem and large throny green root-leaves, which are known for their milk-white veins. The flowers are red-purple in color, and display small spiky black seeds which are crowned with feathery tufts. Each flower-head may produce almost 200 seeds.

Some of the other common names for milk thistle are marian thistle, our lady's thistle, holy thistle and wild artichoke.

The active ingredient in the ripe seeds of the milk thistle is silymarin. Silymarin increases protein synthesis in cells of the liver, by increasing the activity of ribosomal RNA (an important molecule that helps carry out and control protein synthesis). It also induces the alteration of liver cellular membranes to stop absorption of toxins.

Milk thistle is a cholagogue (stimulates bile flow from the gall bladder and the bile dicts into the duodenum), anti-inflammatory, demulcent (softens and soothes damaged or inflamed surfaces, such as gastric mucous membranes), anti-oxidant, detoxifier and galactogogue (promotes the flow of milk).

The part used most often for medicinal value are the ripened seeds.

In the late 1500s, a well-respected herbalist named Gerard wrote that milk thistle was the best remedy grown in nature for all melancoly disease. The word melancoly is from the Greek, "black bile", which at that time referred to any liver or biliary derangement. It has been used successfully throughout history for conditions of the liver and spleen.

Best known for its importance in the support and protection of the liver, milk thistle accelerates protein synthesis by liver cells. It stimulates this organ to produce SOD, a potent free-radical scavenger. Milk thistle can help in rejuvenating the liver when overcoming alcohol toxicity, especially cirrhosis, which frequently occurs as a result of alcoholism. It is the main and most commonly used detoxifying herb for the liver, and is specific for the gall bladder, with significant anti-oxidant properties to prevent free-radical oxidation.

Milk thistle also reduces the effects of many toxins in the liver, including the toxins of the Amanita mushroom and carbon tetrachloride (dry-cleaning fluid) poisoning. This herb protects the kidneys, and is beneficial to those suffering with psoriasis.

This "multi-tasking" herb also blocks allergic and inflammatory reactions. It is mucilaginous in nature, and increases immune response, eradicates infection and soothes inflamed tissues. It increases the production of T-lymphocytes and soluble proteins (interferon), therefore aiding the body's immune response.

Milk thistle is known to aid the body in the absorption of certain life-promoting nutrients such as CoQ10 (coenzyme Q10), vitamin A, vitamin D, vitamin E and vitamin K.

Modern day toxins that may damage the liver are alcohol, environmental contaminants, junk/fast foods, recreational drugs and prescription medications. Following are just some of the diseases and conditions which improve with milk thistle use:

The side-effects of the milk thistle herb are very uncommon and minor in severity. It may cause symptoms such as headache or skin rashes. Since it can have a laxative effect in some people, its use might result in gas and bloating.