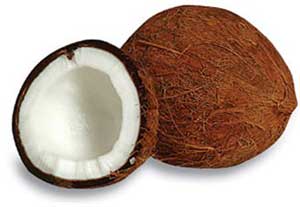 The Coconut palm is a tree which can be found growing in regions as far north as Hawaii and as far south as Madagascar. It's also known as the "tree of life", since it's fruit (also referred to as a nut or seed), has been a source of meat, juice, milk and oil which has nourished populations around the world for generations. Not only rich in fiber, vitamins, minerals and other nutrients, Coconuts also have a history of being used as utensils, instruments, etc.

Early Spanish explorers called the coconut "coco" which means "monkey face", because of the three indentations (eyes) on the hairy nut which resemble the head and face of a monkey. The name "nucifera" means nut-bearing.

Coconuts are a rich source of fatty acids, fifty percent of which are lauric acids. Lauric acid is a medium chain fatty acid which is formed into monolaurin in the body. Monolaurin is an anti-viral, antibacterial and antiprotozal monoglyceride used by both humans and animals to destroy lipid-coated viruses such as HIV, herpes, influenza, etc.

Medium chain tryglycerides (MCTs) in Coconuts are very similar to the fats in mother's milk. In Coconut oil, "virgin" refers to the less processed and refined oil, which is preferred because it contains a class of protective phytochemicals called polyphenols. These polyphenols promote a healthier "lipid metabolism and antioxidant status" within the system. Some Coconut oils are bleached or deodorized which is undesired, as these processes can reduce the levels of phenolic, therefore changing a healthy food into a harmful one.

Coconut oil is an anti-viral, antibacterial, anti-fungal and antioxidant. It's been used to kill viruses in cases of influenza, herpes, measles, hepatitis C, SARS, AIDS, etc. Some conditions where it proves to be effecive as an antibacterial are ulcers, throat infections, urinary tract infections (UTIs), gum disease, pneumonia, etc. Conditions such as candidiasis, ringworm, athete's foot and diaper rash are improved with the use of Coconut oil due to its anti-fungal and anti-yeast properties. 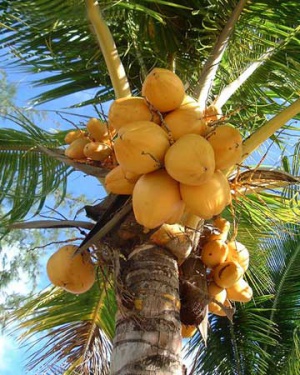 Some vitamins and minerals contained in Coconuts are as follows:

Prevention and treatment of the following conditions and diseases have been successful with the use of Coconut: