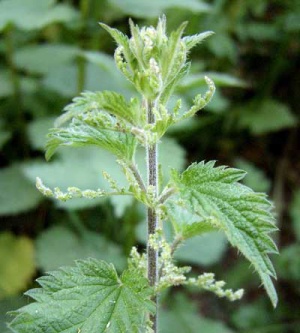 Nettle is a perennial plant which grows in both temperate and tropical wasteland areas of the world. It was cultivated in Scotland for the fibers in the stalks used to make a linen-like cloth. It was also naturalized in Brazil and other regions of South America. 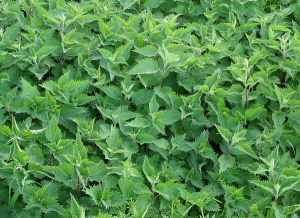 Nettles Fields
This herb is known for its pointed, hairy leaves, which sting when they touch the skin. The name urtica originates from the Latin verb urere, which means "to burn". Nettle has flowers which range in color from white to yellow, roots and leaves are most commonly used for medicinal purposes.

Some of the other names used are great stinging nettle, big string nettle, common nettle, gerrais, ortiga and urtiga.

Stinging Nettle is a popular agent for irritating the skin of an inflammed area, increasing the blood flow, and therefore reducing the inflammation. As an astringent, it helps to stop bleeding.

Used as a tea, it can be given to children who are suffering from anemia, since it is very rich in iron, silicon and potassium. Allergic symptoms such as teary eyes or runny nose are improved with the use of this herb.

Nettle is an alkalizing herb which is rich in minerals. It aids in the treatment of diarrhea and dysentery, increases the flow of urine, and purifies the blood while it increases circulation. It acts as a mild Cayenne, by opening up (dilating) the blood vessels.

Following is a list of conditions that may be prevented or improve with the use of Nettle.

Nettle may lower the blood pressure and heart-rate. Chronic use of this herb is not recommended due to is diuretic effects.